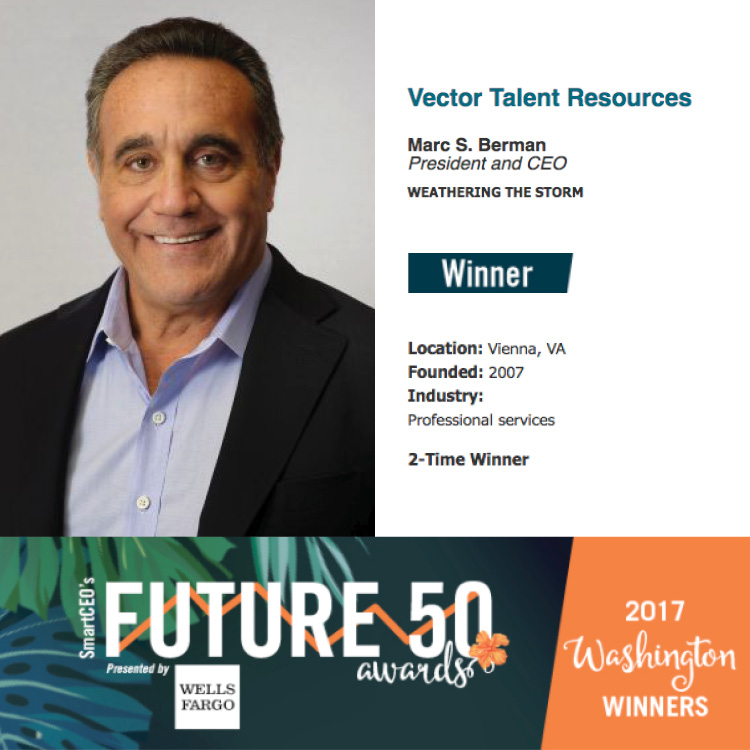 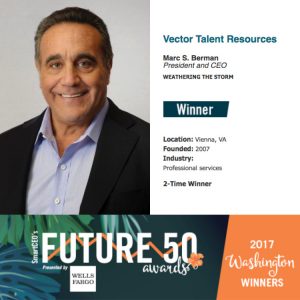 Vector Talent Resources was founded in 2007 and acquired by president and CEO Marc S. Berman in 2012. The company provides staffing for technology, marketing and communications, operations and administration, and HR and recruiting. For Vector, the key to susxtaining rapid growth has been the agility to pivot into different segments of the marketplace. While the company’s core business was staffing talent to government contractors, an expansion into the commercial arena has given it the bandwidth to weather the constant firestorms of government work.

Quick Tip: “At the core of a great leader is the necessity to be the type of person that others will follow.”

Vector has faced two key challenges in recent years. The first was Berman’s two-year non-compete agreement. The second and more complicated issue was that at the same time, there was a government shutdown, a sequestration period and an intentional new policy of “lowest price technically acceptable” for most awards under federal guidelines. Nevertheless, Berman’s growth-minded leadership helped Vector persevere. “I was able to grow my last firm from $1 million to $40 million in a 10-year period. I tried to take that mid-sized company mentality while growing Vector,” says Berman. “That mistake caused me to hire some of my staff a little too early, which put unnecessary financial pressure on myself. However, in the long run, I was able to surround myself with top managers who have helped Vector continue its success.”