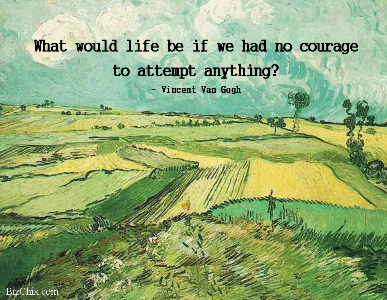 The Courage to Fail

“What would life be if we had no courage to attempt anything?” — Vincent van Gogh

For the most part, failure is an innate byproduct of success, but even more important, it defines the nature of growth. People often think that success takes a linear path, that even at the top there is no room for mistakes. As life often proves, the path to success is a winding road that leads to unexpected discoveries. One of my favorite quotes is from the Dalai Lama, who said, “Remember that sometimes not getting what you want is a wonderful stroke of luck.” That notion is part of the acknowledgment that failure is a critical necessity to setting you on new paths.

There’s something to be said for applying the process of discovery in the art world to the business realm. I once had an art professor who took the Bob Ross approach to artwork: that there were no mistakes, simply new details. My professor didn’t have quite the same sunny disposition as the TV artist, but the notion that mistakes within your painting could always be remedied and add another dimension to your piece was a lesson I carry to this day. There is no error that can’t lead to some type of solution, or a new discovery or approach.

We need to redefine the conversation about failure; rather than giving it a negative connotation, we should see it as a means of learning. Failure is the process by which we find success and sustain growth.

Written by Jen Vargas, Team Captain and RPO Recruiter, at Vector Talent Resources. For more information about how Vector can help you, contact Jen at jen@vectortalent.com or call us at 703.639.2160.