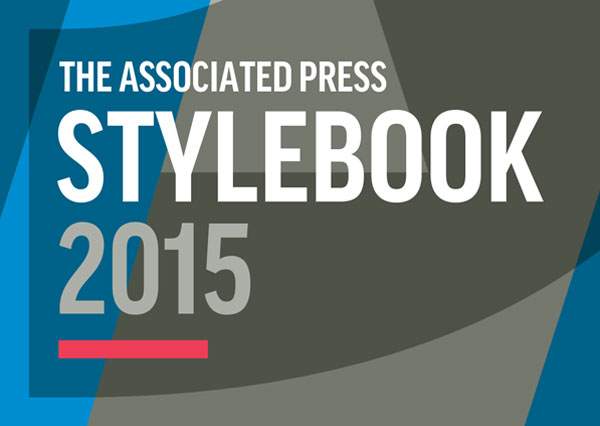 The 2015 edition of the Associated Press Stylebook became available in late May 2015. The guide includes a “What’s New” page at the beginning of the book, noting changes including new entries in the Sports, Fashion, and Religion chapters; an updated Photo Captions section; and words from the Social Media Guidelines now appearing in the A–Z Stylebook, which itself contains new entries. What follows are some highlights.

If, like me, you live in the Washington, DC, area, you’ve most likely heard the argument that it is no longer correct to use the term global warming, and you must now use the term climate change. Well, with its new global warming entry in the A–Z Stylebook, AP notes that while the latter is more scientifically accurate, it’s OK to use the two terms interchangeably. For other political talk—and for fellow animal lovers—the new animal welfare activist entry notes that this is the preferred term over animal rights activist. So start using that to describe yourself. In other animal-related guidance, the new entry dog walker notes that term is two words.

The updated Food chapter has more than 30 new entries. For my fellow beer snobs, the new craft brewery entry notes that this is the preferred term over microbrew for a small, independent brewery. So, when you’re trying to assert your hipster status, don’t blow it by bragging about the new microbrew you’re currently obsessed with.

Some of the most interesting changes for baseball fans like me appear in the updated Sports chapter. I’ll showcase some of those in Part II of this blog next week. Other helpful changes include a black border along the right-hand side of the first page for each letter in the A–Z Stylebook, making for easier navigation. (In previous editions, this feature appeared only on the first page of new chapters.) Especially handy is the new 85-page index at the back of the book, which replaces the super-short Quick Reference Guide of earlier editions.

Not-so-helpful changes include the unpleasant, almost rubbery texture of the cover and the thick plastic spiral binding; it began unraveling almost immediately once I started thumbing through the book. Also, it seems the holes punched into the pages for the binding were not cleanly made. Every time I flip through the book, I end up with a lap full of tiny, clingy bits of paper. But, given all the useful new entries—and especially the new index—added to my most-consulted style guide, I suppose I can brush these off as minor irritants.

Written by Mary Bruzzese, Editorial Project Manager at Vector TalentMEDIA. For more information about how TalentMEDIA can help with your next editorial project, contact Mary today!